Collection of experiences from co-creation workshops is now out!

Boosting cross-sectoral cooperation is the most important output in the “Healthy Boost” project. Gathering together people from different sectors, which is resulting in getting more opinions, a wider range of views and perspectives of citizens, who are actually living in the world, which cities and municipalities policies are creating is an added value during every administration project.

Simply bringing together is not enough to encourage people to join meetings (especially, when it is something extra, what they do after working hours). This is why partners from 9 cities tried to involve stakeholders in the more participatory way of meeting  –  co-creation workshop.

The idea behind the co-creation workshops is to boost co-creative design between the partners and use more participatory methods to engage stakeholders and partners, which will result in enhancing the participation of citizens in the decision making process. Representatives from different sectors (e.g., departments from other branches, NGOs, SMEs, informal groups of citizens) were invited by the city's administrations to discussions, brainstorming sessions, sharing ideas and experiences during different types of workshops.

Their insights and different perspectives were used to modify solutions according to the actual needs of citizens working in different sectors, with different needs, expectations, and points of view.

During the workshops, participants discussed the pilot activities (e.g., they reviewed the Model, pilot plans and changes in them, communication process, etc.). The outcomes of workshops were analyzed and implemented in the planning and decision making process. Testing the co-creation workshops brought effects on several levels:

Now you can find on our website the report containing not only information regarding how the co-creation approach influenced the pilots, projects and city’s policies, but also best practice from each of 9 cities, which are the ready recipes for workshops. We are encouraging you to conduct co-creation workshops for developing innovative cross-sectoral actions to promote health and well-being in your cities. Try to utilize the case-studies presented in this material as a starter and then use your imagination to come up with some new co-creation workshop ideas. In the case of cooperation, as long as the method is used to bring people together and find new resolutions, the sky's the limit. 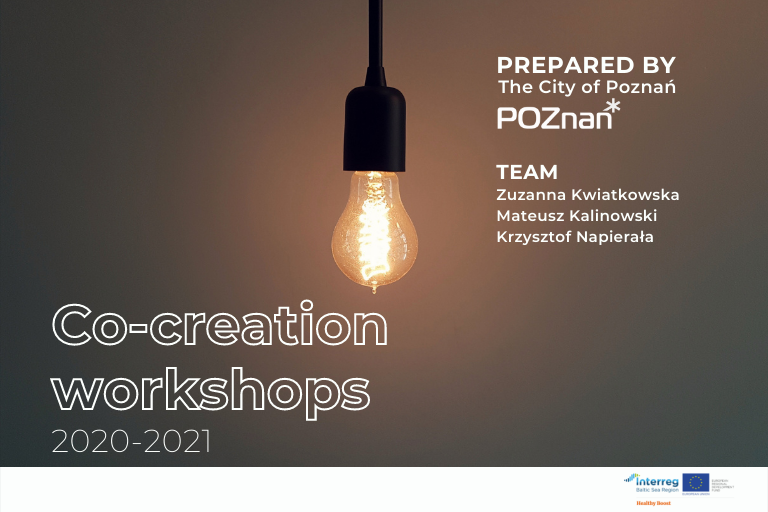